Discovering the top highlight attractions that you should not miss when you are having a two-day trip in Hanoi.

Hanoi is a beautiful city where the history and culture, the modern and the ancient cross. In Hanoi, you will never be stuck at finding what to see. Fortunately, most attractions are located in walking distance with the other. Therefore, it’s quite easy to set up an itinerary to fully explore the city. You are not wasting your precious time, here are AA Vietnam Travel’s recommendations of top must-go places in Hanoi to include in your itinerary.

Declared by UNESCO as World Heritage Site in 2010, Thang Long Imperial Citadel signifies historical and cultural importance of Vietnam. This ancient citadel was the political center for 13 centuries and was the capital of Vietnam for eight centuries. Standing 40 meter high in the center of the castle is Hanoi Flag Tower – the symbol of the spirit of freedom and independence of Hanoi.

You had better spend a one-hour walking to explore this prominent place. The archeological site of Thang Long Citadel preserves many architectural vestiges such as old palaces, ancient roads, ponds, and wells. Many historical artifacts were dating back centuries ago that will help you understand more about Vietnam’s history and culture. You should visit the display room to observe these excavated items with a knowledgeable guide.

Built by the French colonialists in 1896 to detain prisoners and political criminals, Hoa Lo Prison has an area of ​​up to 12,000 m². Hoa Lo prison is a symbol of the Vietnamese patriotism and countless sacrifice for national independence.

The moment of entering the prison, you will feel “thorny” by the graphic displays here. Most exhibits relate to the prison’s uses up to the mid-1950s, depicting how the Vietnamese veteran struggle for independence from colonial of France. The image of prisoners enduring harsh punishment sometimes make visitor shed their tears because of the inhumanity occurring in this place.

According to the poll published by CNN, Hoa Lo prison in Vietnam ranked first in the top 5 most horrifying locations in Southeast Asia. It is also known for being in the list of the ten most notorious prisons in the world.

The best way to indulge in the most authentic local life in Hanoi is exploring the Old Quarter. The city expands every day, but the original of Hanoi’s life and people remains in these thirty-six streets. The Old Quarter is daily crowded with motorbike and bicycles as well as food carts rolling down the streets. Moreover, you can enjoy the best authentic food in a very local way of eating on the sidewalk – a must-try experience when you visit Hanoi.

This fascinating area also offers you many outstanding examples of French colonial architecture packed along narrow streets. It is highly recommended that you explore this area on foot, facing the local traffic in the local style to understand Vietnamese culture.

Hoan Kiem lake is considered the green heart of the city. The name “Hoan Kiem” which means Returned Sword originates from an interesting legend. It is said that An emperor had returned the magical sword to the Golden Turtle after it helped him defeat the enemy. This legend is based on the fact that turtles are living in the lake.

Hoan Kiem Lake is a popular hangout place for both local and visitors where you can sit back and enjoy the peaceful view. At the weekend, the local authority will block the traffic to create a walking street around Hoan Kiem Lake. People will return to childhood with old folk games such as jumping rope, shuttlecock, etc. Many other activities such as street dance, busking, and food market are also taken place around Hoan Kiem Lake.

THE TEMPLE OF LITERATURE

The Temple of Literature is considered a must-go attraction in Hanoi. Established in 1070 under King Ly Thanh Tong, it is a place to worship Confucius, scholars, and sages. This temple is also considered the first university in Vietnam to train talented people to serve the country. Up to now, Van Mieu Quoc Tu Giam has become a symbol of the thousand-year-old capital and a cultural cradle of Vietnam.

The ideal time to visit The Temple of Literature is at Tet Holiday. Many people, especially a lot of students from all over the country flock to this place in the early days of spring. They burn incense and ask for the words from the solicitor, which is believed to bring good fortune and success.

Founded in 1969, Thang Long Water Puppet Theater is one of the most famous water puppet shows in Vietnam. In this form of art, historical stories and historical legends are recreated by wooden puppets on the water which are unique. The creatures, controlled by a troupe of masters at the backstage, dance and act lively to the traditional music on the water stage. The performances are usually short sketches of historical stories, village life or regular folks such as the Returned Sword legend mentioned above.

Not only attracting domestic visitors, but Thang Long puppet theater is also a tourist destination for foreign guests who want to learn about the culture and the traditional art forms of Vietnam.

Dong Xuan Market is the busiest and oldest local market in Hanoi which was built in 1889 under the Nguyen Dynasty. It is a wholesale market in the northern region trading a variety of goods, ranging from cloth, clothes, silk brocade, dried food, jam, confectionery, food, souvenirs to electronic home appliances, etc. When buying, you should choose carefully, check prices beforehand and bargain to avoid being ripped off.

If you are a food-lover who excitedly want to experience Hanoi’s street food, Dong Xuan Market will be your favorite place. This place offers a whole range of delicious local dishes: banh tom, che, bun cha, which is safe to eat.

Ho Chi Minh Mauoleum is the most visited place by foreigners if they spend a day exploring the city. In this sacred place lies the embalmed remains of the most iconic Vietnam’s Hero – Ho Chi Minh, who has sacrificed all of his life to bring freedom to the country. In memorial to the great leader, the contemporary government had followed his wish when he passed away. That his body is cremated and his ashes are placed in 3 regions of the country.

Ho Chi Minh Mausoleum has not only historical significance but also holds impressive architectural value. Besides, this mausoleum has resembled construction with Lenin’s tomb in Russia. It is a concrete and granite building that stands in the middle of Ba Dinh square, where Uncle Ho read the declaration of independence.

If you intend to visit Ho Chi Minh Mausoleum, make sure to dress politely ((no shorts, sleeveless shirts, and miniskirts). At the entrance, you will have to handle all bag and camera as taking photos is not allowed inside the sanctum. After that, you will join a long queue of visitors and walk steadily and quietly through the mausoleum with total respect. Afterward, you can spend more time visiting the Ho Chi Minh Museum to grasp more knowledge about history.

After visiting Ho Chi Minh Mausoleum, you might want to stop at the One Pillar Pagoda, which is located behind Ba Dinh Quare. Rising from a tranquil pond on one pillar with the shape of a lotus, this pagoda has one of the most unique and iconic religious heritage in Vietnam.

The one-pillar pagoda is built in Ly Thai Tong dynasty. According to the folk, the heirless king Ly Thai Tong dreamed about the Buddist giving him a son on a giant lotus. After that, the queen did give birth to a son. To commemorate this event, the emperor decided to build the lotus-shaped pagoda to show gratitude to Guan Yin Buddha. Inside the pagoda is the shine of Guan Yin Buddha, which is believed to grant blessings of fertility and health to the prayers.

If you want to explore religious life of Hanoi locals, then Tran Quoc Pagoda should be included in your itinerary. Tran Quoc Pagoda, situated in a small peninsula of West Lake, is an excellent combination of beautiful scenery and sacred buildings. The pagoda used to be a favorite sightseeing place of the emperor and held historical events. The best time to visit Tran Quoc Pagoda is after Tet holiday, at which time you can observe the worshiping activities of locals.

The striking feature of Tran Quoc Pagoda is the red stupa standing high in the lush greenery. With the height of 15m, the stupa comprises 11 levels, each of which locates a Buddha statue made from gemstone. The wall of the stupa is sophisticatedly carved with Buddhist images. If you start to get bored, you can visit the small museum storing historical and religious relics.

After visiting Tran Quoc Pagoda, taking a stroll around West Lake is not a bad idea. The lake is the biggest in Hanoi, where you can find the most tranquil vibe of the city.

VIETNAM MUSEUM OF ETHNOLOGY in HANOI

Vietnam proudly has 54 ethnic groups. Therefore, to preserve and educate people about the cultural diversity in Vietnam, this museum was established. The museum possesses an impressive collection of artifacts, rituals, and every-day objects that present different groups of the minority. The artifacts are displayed in various categories, for example, custom, clothing, jewelry, weapons, musical instruments, religions, beliefs, and many other spiritual activities. 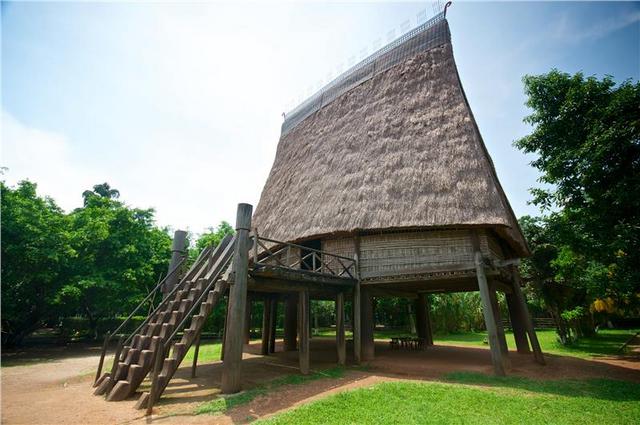 You will be attracted to Vietnam’s ethnic culture, which is presented in a clear and creative layout. Next, the outdoor museum also impresses visitors with a range of traditional homes displayed in a natural surrounding. Exhibits are labeled and explained in Vietnamese, English, French, and some other languages to support foreigners. After wandering around the museum, you may want to attend some leisure activities such as water puppet shows, folk music performance or calligraphy. Instead of being bombarded with knowledge and details, you will feel entertained while learning to appreciate cultures.

Opening Hours: From 08:30 to 17:30, from Tuesday to Sunday
Address: Nguyen Van Huyen Street in the Cau Giay

Like AA Vietnam Travel fanpage for interesting tips and news.

AA Vietnam Travel is a fully licensed local tour operator in Vietnam. We proudly present to you variety of tours and travel styles which unveils the best of Vietnam.

The most anticipated racing competition on the planet, F1 Grand Prix, will be held in Hanoi, Vietnam, in April 2020….

Out of many ways to explore the fanciful town in fog, Sapa trekking has been ranked first in the best…

FALL IN LOVE WITH THE FLOWER SEASONS IN HA GIANG

Along with the transfer of all things through the seasons, the Ha Giang mountains also change their colors multiple times…