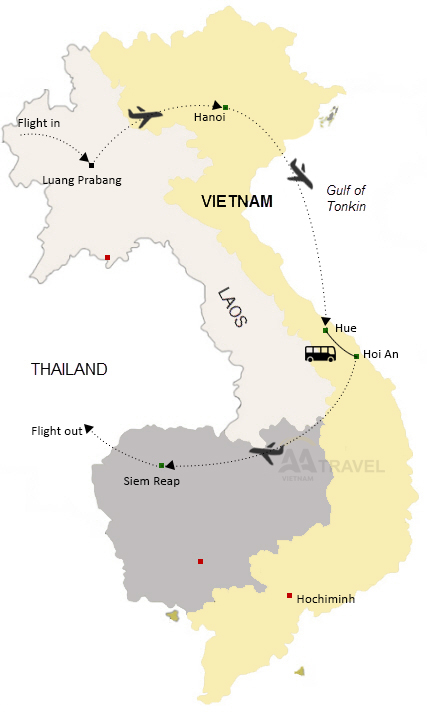 Welcome to Luang Prabang, Laos! A charming town set amidst lush mountains. This sacred city of golden temples and glittering spires is has been recognized by UNESCO for its artful mix of traditional Laos and colonial architecture. Upon your arrival, you will be greeted and welcomed by your private tour guide and driver who will provide you the transport to the hotel. Check in and rest for the rest of the day. Overnight in Luang Prabang.

Today tour will provide you the panorama of the ancient capital. After the breakfast, you will visit the Buddhist Wat Xieng Thong and Wat Mai with their sweeping roofs and decorative features. Then cruise the impressive waters of the Mekong River to reach Pak Ou caves, filled with thousands of Buddha images left by pilgrims.

Later in the afternoon return to the town and wander the halls of the former palace which is now a museum and watch the sun set from the top of Mount Phousi. A gentle walk to a night market in the evening if you are not tired. Dinner and overnight in Luang Prabang.
​Meals included: Breakfast, Lunch

Rise early to the sounds of the temple gong and watch the daily ritual of monks collecting their daily alms. This important part of Buddhist culture is not to be missed! After having breakfast at the hotel, drive south to Kuang Si waterfall, one of Luang Prabang’s most picturesque sights. On arrival, take a hike through the national park towards the Kuang Si waterfall. Continue to the top of the main waterfall and enjoy a swim in a large pool. Have lunch in the tranquil surroundings of the park.

Thence drive back to the center and onward to the airport for flying to Hanoi, Vietnam. Goodbye Laos! Get picked up on arrival and transferred to the downtown for hotel check-in. Overnight in Hanoi.

This day tour to learn about the capital city of Vietnam occupies your whole day with featured sites, including Ho Chi Minh Mausoleum, his house-on-stilts, One Pillar Pagoda, Temple of Literature – Vietnam’s first university for the morning. Your lunch today is served at a restaurant in town with local tastes. In the afternoon, the tour continues with a visit to one of the following museums (you can pick the one you like): the Ethnology Museum, Army Museum, National Fine Arts Museum, Hanoi Hilton prison or Vietnam Women Museum). Followed by a short walk or a cyclo ride in the Old Quarter. End the day tour with a traditional Water Puppet show. Spend your second night in Hanoi.

As usual, the breakfast is served at your hotel. The morning drive to Cat Ba Island takes you about 4 hours, including 30-minute ferry ride. About 12:15, get on your private boat to start the cruise. Once you are aboard, enjoy the welcome drink before checking into your lovely cabins. The cruise starts with a smooth move through a floating fishing-village. Lunch is served while you are gently winding through the beautiful landscape of Lan Ha.

After lunch, you will arrive at Vung Kiem Lam area where you will get off the boat for padding your kayaks through tunnel-like caves and discover the hidden lakes and swimming off your kayak. Get back on your boat and carry on the cruise to Cha Bau area. This is a remote corner of the World Heritage. Get the anchor dropped as you are spending the night here. Take more swim off the boat or just relax on the open deck. Dinner and overnight on board.

Wake up early for the sunrise and fresh air from the top deck if you wish otherwise you are able to remain on bed until breakfast time (around 8:00AM). After breakfast, continue on your cruising discovery of Halong Bay (From Rang Dua area to Ngon Tay Islet.) Turning backward to Lan Ha Bay for the rest of the morning. The boat will stop by Ba Trai Dao beaches for you to take a swim before lunch.

In the afternoon, transfer to Viet Hai dock where you will embark on a scenic cycling ride into a part of the national park, visit Viet Hai village, the only community allowed to remain in the park’s protected area. View the daily of the villagers and get some local interactions with the assistance of your guide if there is a chance. Ride back to the boat and head to the night place in Lan Ha Bay. More swimming time available if you wish. Dinner and overnight on boat.

This morning, after the breakfast. The junk will meandering in between the sheer cliffs toward Monkey Island whose beach is sandy and ideal for the last swim. Here, the guide will hike you up to a viewpoint on a mountain. From there, you can get a beautiful bird-view from the high. Get back on boat and get ready for the brunch. Check out of your cabin (10:00 AM) on the way back to Beo Wharf. 11:30: Disembarkation at Ben Beo Wharf.

The afternoon hydrofoil ride takes you back to the main land and make your way to Noi Bai airport where you will take the 19:00 flight to Hue. Arrive in Hue, get picked up and transferred to the hotel for the night.

Hue city is one of the most cultural and historical territories of Vietnam, once ruled by Emperors of Nguyen dynasty. To start the day, you’ll embark a dragon boat at a little dock by the bank of the poetic Perfume River for a short cruise to visit Thien Mu Pagoda, constructed in 1601; the 21-meter stupa tower is the masterpiece of this charming pagoda. Thence getting back to your private vehicle & drive out of the city to visit Minh Mang King’s tomb. This imperial tomb is without doubt the best-combined natural landscape and architectural complex. Lunch is served at a local restaurant.

In the afternoon, you will be visiting the Royal Citadel where the Nguyen Dynasty ruled between 1802 and 1945. Your tour guide will take you walk throughout the complex & enjoy the beautiful constructional works divided many sectors. Late afternoon, back to the hotel. Overnight in Hue

The morning drive to Hoi An via Hai Van Pass will occupies half of your day. Arrive at Hoi An ancient town. Check into your hotel and then go for lunch at a nice restaurant in town Nestled a couple of kilometers inland on Thu Bon river, Hoi An is typified by the 16th century Vietnamese, Chinese and Japanese architecture.

The afternoon walking tour offers you a chance to see how beautiful the Old Quarter of Hoian is. The sites include the Japanese Covered Bridge; Phuoc Kien Assembly; Tan Ky ancient house; Hoi An Culture and History Museum and Quan Cong temple. Evening is free on your own to chill out at a riverside café or enjoy shopping with tailor-made clothing, shoes and lanterns. Overnight in Hoi An

Day 10 is yours to do your own things in this charming Old Town: You may be just easy at leisure to enjoy your accommodation facilities or go shopping at the center. If you fancy a swim, this is also the time for that. If your hotel in town you can easily reach a nice local beach by bicycle.

​The morning of Day 11 is spent for a bike ride to the nearby peaceful countryside to learn the daily life of the locals and their work on farms. Get back to the hotel when it gets hotter by noon. The rest of the day is at leisure again to relax or chilling out somewhere in the Old town. Overnight in Hoi An.

Free at leisure until meeting your tour guide and driver and heading to the airport for your flight to Siem Reap, Cambodia. On the way to Danang, pay a visit to the Museum of Cham Sculpture. With their roots dating back as far as 192 AD, Vietnam’s indigenous Cham people lived an Indian way of life in both culture and language. This museum is dedicated to this period and the Champa existence which began predominantly in the coastal areas of Vietnam. Your goodbye Vietnam flight takes you 2 hours to Siem Reap, Cambodia. Welcomed and greeted by your Cambodian tour guide and driver. Taken to the downtown for the hotel check-in. Overnight in Siem Reap.

Head into the actual Angkor complex today with a visit to the Roluos Group. Roluos is the site of an ancient center of Khmer civilization known as Hariharalaya. Roluos consists of three main temples: Bakong, Lolei, and Preah Ko. In addition to the temples, enjoy a trip through the surrounding countryside (paddy fields and sugar palm trees) aboard an ox-cart ride, a fun way to get in touch with rural Cambodia and its friendly people. The final destination is Roluos Pagoda, where Buddhist monks will perform a private blessing ceremony, wishing health and safe journeys – a memorable experience! In the afternoon visit the ancient city of Angkor Thom, the last capital of the Great Khmer Empire under the reign of Jayavarman VII. Enter the city through the ancient South Gate before heading onward to Bayon Temple in the exact center of the city. This 12th-century masterpiece is known for its 54 faced-carved towers, Terrace of the Elephants, and Terrace of the Leper King. Overnight in Siem Reap.

As usual, breakfast at the hotel. Begin the day with a tour of some different Angkor temples, exploring the Small Circuit via local ‘remork’ (similar to the Thai tuk tuk). The most illustrious of these temples is the 12th-century Ta Prohm. Ta Prohm has been left largely as it was found: overgrown by jungle trees and vines, with many parts of the temple crumbling to the ground. It is by far one of the most picturesque and memorable of the Angkor temples. The visit will also include Banteay Kdei, a Buddhist monastery from the late 12th Century, and Srah Srang, also known as the “pool of ablutions”. Lunch at a nice restaurant in town.

In the afternoon, set out to visit the legendary Angkor Wat. Built during the reign of King Suryavarman II in the early 12th century. Inside the temple, the walls are covered with stone carvings, bas-reliefs, and over 2,000 Aspara dancers. As this is the last evening in Cambodia for you, a Khmer farewell dinner accompanied by traditional Apsara dance will be an experience to remember. Overnight in Siem Reap.

Enjoy the day at leisure. Depending on the departing flight time, you may have time to do some last shopping yourselves. Transport will be provided to the airport for the individual onward flight. Goodbye Cambodia!